In a new paper published in Evolution Letters, a research team from Tohoku University reveal the evolution of a gene related to human-unique psychiatric traits. Here, authors Daiki Sato and Masakado Kawata tell us more about their findings.

How and why unique human characteristics, such as highly social behavior, languages, and complex cultures, have evolved is a long-standing question. In our laboratory, we have focused on problems as to what factors facilitate and/or constrain evolution using mainly non-human organisms. However, during recent years, a large amount of genomic data, especially for human genome, have been accumulated, and thus, we can now attempt to resolve the mechanisms underlying human evolution using various methods to detect the signature of various forms of natural selection in the human genome.

The first motivation for our study came from the hypothesis that some psychiatric disorders (PDs) have evolved as maladaptive byproducts of adaptive human evolution. In addition, recent studies have shown significant genetic correlations between PDs and human personality traits, such as neuroticism, extroversion, openness, conscientiousness, and agreeableness, posing the question of how adaptive evolution has shaped our psychiatric and/or personality traits. Thus, among PD-related genes, we searched for those that have been favored by natural selection in the human lineage and identified three as positively evolved genes associated with some PDs, although several studies using the same approach could not identify these genes. Of the three genes identified, we focused on SLC18A1 because it has interesting known variants that affect PDs. SLC18A1 encodes vesicular monoamine transporter 1 (VMAT1), which is involved in the uptake of monoamine neurotransmitters, such as serotonin, dopamine, and norepinephrine, into synaptic vesicles. VMAT1 has variants of two different amino acids, threonine (Thr) and isoleucine (Ile), at site 136 (Thr136Ile). Several studies have shown that these variants are associated with PDs, including schizophrenia, bipolar disorder, anxiety, and neuroticism. Individuals with 136Thr tend to be more anxious, more depressed and have higher neuroticism scores. Our paper showed that other mammals have 136Asn at this site, but 136Thr had been favored over 136Asn during human evolution. Moreover, 136Ile variant had originated nearly at the Out-of-Africa migration, and then both 136Thr and 136Ile variants were maintained by natural selection in non-African populations. 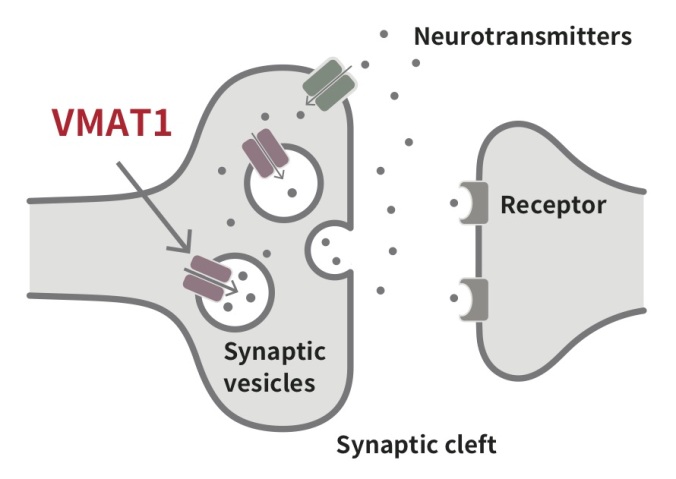 VMAT1 (vesicular monoamine transporter 1) is encoded by the SLC18A1 gene, which
is involved in transfer monoamises, such as dopamine and serotonin. Image by Daiki Sato

Our results provide two important implications for human psychiatric evolution. First, through positive selection, the evolution from Asn to Thr at site 136 on SLC18A1 might have led to more anxious and depressed human minds in the course of evolution from ancestral primates to humans. Inoue-Maruyama et al. (2001) speculated from an analysis of serotonin-transporter variants that anxiety has been favored throughout human evolution. Raghanti et al. (2018) proposed a neurochemical hypothesis that selection favored a human dopamine–dominated striatum (DDS) personality style in our earliest ancestors, which led to externally driven behavior and amplified sensitivity to social cues that promote conformity, empathy, and altruism. The results of their study showed that the concentration of dopamine in the striatum was particularly elevated in humans, and that acetylcholine was lowered. The 136Thr variant might be favored for interacting with such complex neurochemical changes during the evolution of human psychiatric and emotional features.

In our ongoing research, we are attempting to identify the phenotypic and fitness effects of Thr136Ile variants and clarify how and why the variants are maintained by balancing selection.

Daiki X. Sato is a PhD student and Masakado Kawata is Professor at the Graduate School of Life Sciences, Tohoku University. Their original study is freely available to read and download here.